Korea: our first need is to step back from mass hysteria.

We need to move beyond a rage against Australian Prime Minister Turnbull’s folly on Korea, calmly assess the provocations by Trump and Kim, respect the rights of south Korea and understand how destructive US global strategies have become.

A number of commentators have characterised DPRK strategy as pursued by acting, out of necessity, “ferocious, weak and crazy”.

In the 1990s they used their nuclear program as an economic bargaining chip. All that changed after 9/11 when G W Bush lumped the DPRK, Iran, Iraq and Libya together as the Axis of Evil.

North Korean leaders watched the fate of others identified in this axis by Bush. Saddam Hussein had no weapons of mass destruction, his regime was destroyed... and in the end Iraq more controlled by Iran than anyone else. In Libya Gadaffi submitted, undid his nuclear program and was still chewed up. Iran has done all asked of it and is now subject again to war threats.

Blind Freddy, or a Blind Kim, can see that the only security for the DPRK must therefore be to hasten to achieve a credible nuclear deterrent. They are at that threshold.

North Korea has never threatened first strike with a nuclear weapon. It has however lived with persistent first strike threat for a long time.

China once supported the notion of unification of Korea but now cannot tolerate the prospect of a US dominated South Korea taking command of the North.

In South Korea since May a reforming president who might make a Whitlam envious has been embarked on domestic reform as well as pursuit of sanity in intra Korean affairs. And has had Trump’s agreement that the ROK is to take the lead and there must be no war. Speaking thus also to Trump for an hour in the past week.

It is appalling that an Australian Prime Minister could so misread the ANZUS Treaty as to claim that we are automatically at war with North Korea if the US is at war. This is not 1939; Turnbull is not Menzies. Are we to think all bankers have such naive understanding of the world? Who advises Turnbull?

In 1965 the Menzies Government had the almost-decency to squeeze from the government in Saigon a request for troops we would send to Vietnam at US request. But in the post modern, why is Turnbull (why are so many) blind to the existence and the entitlements of South Korea to its own self-determination: as a country in the region, member of the G20, GDP same as ours, population double ours. Where do our heads live? Solely in a Murdoch-trumpian media world?

There are annually-scheduled major US-ROK exercises, with history of practising decapitation of the DPRK, planned for next week …when now also the DPRK leader may make a demonstration of nuclear status, firing a nuclear capable rocket or rockets targeted at points just outside the territorial waters of Guam. In the past week nuclear-armed US B1-B bomber have once again cruised over the ROK and very close to North Korean airspace. Who is entitled to demonstrate what?

The ROK is trying to speed up transfer of command over its own troops from the US in wartime, legacy of decades of dictatorship and the unfinished war.

This recent article in a South Korean media outlet shows something of what the ROK president is trying to do in domestic reform. A progressive perspective we cannot imagine in Australia, lifting wages, getting more employees off casual to permanent, challenging commercial conglomerates, focus on human rights including migrants. Etc. Difficult.

Especially difficult with a big essential ally acting so badly and with the example of Venezuela for any challenges to hegemony. We should be alert and sensitive to actualities in a regional country and not acting like the fifth cockatoo on the branch.

The world has been led up a stupid path with fear of North Korea. More credibly the US is bent upon undermining every other nuclear power’s second-strike capability, ending all balance of power. While on the real front, away from unusable nuclear weapons, the US tears up one country after another.

'Labels' - an index derived from labelling blog entries when written

Click on photo for wikipedia bio. You can write to me at address on photo. 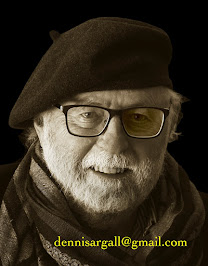 With thanks to Matt Kaarma for the photo.

... to make a fresh start, a note from the author, Dennis Argall.
The word 'cephalophoria' suggested itself to me, is my own invention, as meaning "love of free mindedness". St Denis, my name saint who apparently could not spell, probably a common enough thing in the third century CE, was a cephalophore. That is a member of a small group of christian saints who somewhat prior to the manner of M Python, carried on doing what they were doing after their heads were cut off. Much impressing ladies for a bit, see below: St Denis on the wall of Notre Dame de Paris heading out of town after an encounter with the unwilling.

----
I have worked through a number of blogs since 2000. I have had some eight domain names registered for different projects, of which only 'A Place of Info' remains [update: all closed down in 2018].
Blogger then emerged and I began a blog in my own name... But that seemed a bit too self-important. I wandered into particular fragments of brain space with other blogs. This for home food garden, later this for some international issues. But health issues have intervened to prevent diligence.
A number of blogs regarding travel, perhaps begin here.
From travel, a number of books published through Blurb. Here is the index page. There is an interesting challenge, when you have blogged a trip, to find the entirely different structure of book.
Here then, fed up with splitting my brain as separate blogs tend to do, I attempt anew to put my brain creations together. In a diversity of whatever.
Of course, after all that being said, I started a new blog for a bowerbird.

A case of severe independent-mindedness - a cephalophore - heading out of Paris still preaching to closely admiring women, after an encounter with the unwilling circa 250CE. (image borrowed from Cool Stuff in Paris of Manning Leonard Krull, click on photo.)